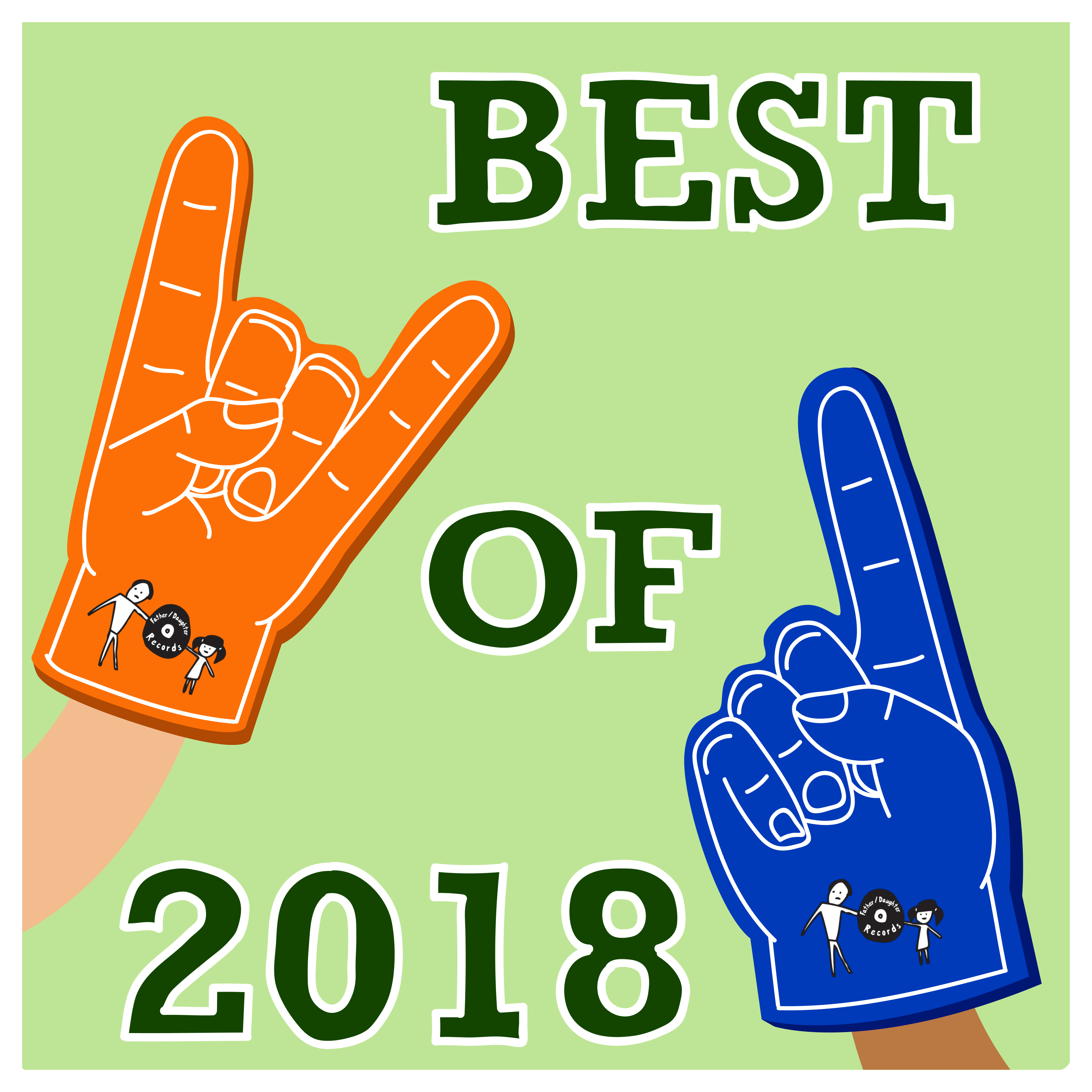 2018 has been a challenging year to say the least. Despite it all, music has been a saving grace. A dim light at the end of a very dark tunnel, lulling hearts, feet, emotions to a better place. This is a playlist of songs that resonated with us, our artists, and pals throughout the year. Here’s to 2019!

LISTEN TO THE PLAYLIST HERE: http://fatherdaughter.co/2018favs

“Radio Song” - Simpson
Everything Simpson has released so far is FLAWLESS. Can’t wait to see what she follows Radio Song up with.

“How Simple” - Hop Along
No song made me dance more in 2018 than How Simple. Don’t know how they do it but Hop Along are an even better live band.

Andrew Lopez (Digital Marketing + director of sandwiches)
“I Did My Taxes For Free Online” - Spring Onion
Favorite track of the year!!! It reminds me of walking home on foggy days, old birthdays, and the convenience of TurboTax. Love the vocal delivery and instrumentation of this whole dang record.

Tyler Andere (A&R + moral support manager)
“Golden Hours” - The Hidden Shelf
To me it was the Little Song That Could. It was quietly released at the top of the year and has kept me sustained throughout 2018 with its beautiful ping-pong beat and Minji Kong's relaxed yet detailed vocal delivery. I love it so much.

Sara Gibbs (Artist extraordinaire + all around great human)
“A Pearl” - Mitski
Made me cry on muni the first time I listened to it!

Pllush
(Karli) “God is a woman” - Ariana Grande
Ariana Grande is #1 for me forever, and I love that she’s experimenting with her style. “god is a woman” is a perfect blend of her new style and her signature hugely epic vocal execution she’s been doing since day one.

(Dylan) “One Kiss” - Calvin Harris/Dua Lipa
It makes me wanna dance every time I hear it.

Fits
(Nicholas) “Halfway Fine” - Ovlov
This song feels both huge and rushing, but also numbed-out. I recently tweeted that the album feels "like being pushed out of a plane fully on opiates," and that totally applies to this song.

“opener” - awakebutstillinbed
It feels like the good old emo/punk bands I used to go see at all-ages DIY venues in the early 2000's and also super new and fresh at the same time. I listen to it when I'm trail running.

Dama Scout
(Eva) “Washing Machine Heart” - Mitski
I love Mitski’s melodies in the vocals and on the synth. The song manages to be ominous and kind of sickly sweet at the same time. I have listened to this record so much and saw her perform it in Paris at an intimate show. I cried.

(Danny) “Toys 2” - Oneohtrix Point Never
While he was alive Robin Williams signed a deed banning the use of his image, or any likeness thereof, for 25 years after his death. This little number imagines a sequel to Toys in which a CGI representation of Williams stars (despite the will of the deceased) and soundtracks it. Strong concept, catchy tune.

SOAR
(Shannon) “Soft Stud” - Black Belt Eagle Scout
I found out about this band when we played with them at Lost Coast Fest in Arcata. They totally blew me away and were absolutely my favorite performance of the whole fest. I got their CD so we could listen to it in the car on the drive home and I haven't really taken it out since. When I listen to it I imagine driving through the redwoods with SOAR and it's just a very nice and tender memory attached to an amazing song / album.

(Jenna) “Big Change” - Swearin'
First of all this song is just a hit but second of all, it encapsulates this feeling of coming out of a turbulent period or a time heavy with transitions (saturn return anyone?!) that hits a nerve for me in 2018. This song especially helps me reflect on my own growth and acknowledges the way my relationship to music and community specifically have changed in a way that is both nostalgic but also proud to have shifted into something new. No art degree no conservatory // it's a beautiful idea /// thanks for this song and for the new album, Swearin'!

Rose Droll
“151 Rum” - J.I.D.
My friend showed it to me and all I can really say about it is that it rocks me like a hurricane.

Sat. Nite Duets
“Loyalty” - Dogs in Ecstasy
In this golden age of podcasts there’s no saner sound than a D.I.E. song.

Remember Sports
(Carmen) “thank u, next” - Ariana Grande
It is the best breakup song of our generation.

(Connor) “Thunder” - Imagine Dragons
I really like the drums in that song, the toms that go POM POM POM.

Pale Kids
“In My View” - Young Fathers
Just an excellent band, and a great pop song.

Shamir
"when the party's over" - Billie Eilish
It has the coolest vocal production!

Alex Napping
“5 dollars” - Christine and the Queens
It makes me want to dance and the music video is one of the sexiest thing I’ve ever laid my eyes upon.

Tasha
“Homebody” - Nai Palm
I don't even think this was the song I listened to the most this year, but I remember everything about the way I felt the very first time I heard it. It lodged itself so deeply in me -- the way it felt like home, and bed, and love, and fall, and closeness. It's a song for train rides through the city and also walks in the woods and drives in the dark. This song feels like all of the small parts of me opened up in the biggest way.

Pardoner
(Max) “Soft Seam” - Dumb
The whole album is really good, wordy, kinda paranoid punk that pretty much starts and never lets up until this track. Super beautiful guitar melodies that weave in and out, and some of the most well-worded melancholy you can find in rock music today. This band always does amazing stuff lyrically, but “sick I’m not/but in eyes that may be blind” is one of my favorite lines I’ve heard in years.

Diet Cig
(Alex) “Talia” - King Princess
I’ve listened to this song so many times this year between screaming along to it on drunk walks home alone and dancing around in my underwear to it the next morning. Something about it feels magic and made me feel so freaky and sad and hopeful and good. I love it!!!

Anna McClellan
“Fake Sweater” - Bethlehem Steel
I had the pleasure of touring with Becca from Bethlehem Steel earlier this year. I got to know Fake Sweater as a live, stripped down song and when I heard the recording I freaked out. It’s good to have friends who rip.

Cocktails
(Pat) “How It Can Be” - Cut Worms
I loved how this sounds - it’s like a 60’s pop-throwback to like the Monkees or Herman’s Hermits or the Hollies, etc. But the production is so fantastically spot-on for that kinda thing that it would absolutely fit right in on a mix with those bands.

NADINE
(Nadia) “This Time Around” - Jessica Pratt
Valuable and helpful as they may be, the tools we use to examine our behavior can't actually disappear the sad and that can be haunting.

FATHER/DAUGHTER FRIENDS
Lucy Niles of Partner
“Let It All Work Out” - Lil Wayne
It told a great story and I cried every time I listened to it.

Alex Licktenhour of Get Better Records & Control Top
“Grudges” - Paramore
This song is so catchy, that it gets stuck in my head for days after listening to it. I love all the 80's pop elements on this whole album, but Grudges is definitely my favorite song off After Laughter.

Sidney Gish
“Woof Woof” - ARTHUR
This song is just a bouncy one to listen to, I think the overall sound of it is fun & it was in heavy rotation for me this fall :))

Jeff Rosenstock
“Violence” - Parquet Courts
The first song that made me scream "fuck yes!" and bother all my friends this year was Violence by Parquet Courts. It refreshing to hear a band turn up and play faster in 2019 instead of the obvious polishing and softening. It's been a year of dread, anxiety and panic, give me something loud with a lot of fast words to scream along with for fuck's sake!

Sarah Tudzin of Illuminati Hotties
"Stoned Love" - The Supremes
There's no good excuse for the fact that it took me until 2018 to hear "Stoned Love," but it's a song I've been returning to all year for it's elusive simplicity, effortless forward motion, and a ever-masterful performance by Diana Ross.

Sophie Allison of Soccer Mommy
“Dandelion” - Kacey Musgraves
My big new discovery is Dandelion by Kacey Musgraves. I discovered her this year when Golden Hour came out and i loved it so much that I went and checked out her older albums. Dandelion was one that really stood out to me because I thought the chords and the structure of the song were really amazing. It’s still one of my favorites.

Manny Lemus of Citrus City Records
“Announcing Humanity” - McKinley Dixon
One of my favorite songs from McKinley’s project “the importance of self belief,” his lyrical prowess is over the roof & im continually inspired by his hard work & ear for crafting amazing sounds, his band are always on one & this track shows that he can be great.

Club Night
"Never Know Why" - Mathew Lee Cothran
The lyrics hit me really hard in this one, growing up and learning to absolve your parents of their mistakes knowing that the pain they carry and pass on isn’t always their fault and we’re all just trying to do the best we can to navigate this life.