That's right, Diet Cig's debut EP Over Easy is getting the vinyl treatment at Father/Daughter. Limited to 1,000 copies, the vinyl pressing of Diet Cig's first EP is designed to look like the world's funniest food: the almighty fried egg. If you still haven't got Over Easy on cassette, we restocked those too, this time on Yellow. Diet Cig's Over Easy 12" is available to pre-order today, and will be available in stores Sep 8. And if you can't get enough of Diet Cig, watch their new music video for the explosive single off Over Easy, "Harvard"!

The last single off Pardoner's first LP, Uncontrollable Salvation, is available to stream on GoldFlakePaint starting today. The track, dubbed "Pivot Fakie", features guitarist Trey Flanigan belting out lyrics about experiencing a loss of control. "Slipping and sliding, hopelessly gliding, getting carried away" is one of our favorite lines off "Pivot Fakie". Peep what GoldFlakePaint has to say about it here. Uncontrollable Salvation will be releasing on Sept. 8 of this year.

Listen to Who Is She?, Seattle's newest supergroup

Nostalgic of the simplicity of having your favorite MySpace pals being ranked on your profile as your Top 8? Seattle's own, Who Is She?, features members of Tacocat, Chastity Belt, and Lisa Prank and takes you on a trip down cyber-memory lane with their first single, "Top 8". Read the Stereogum piece here, and pre-order the tape Seattle Gossip before its release on 10/06.

NPR Music calls "Uncontrollable Salvation" a "blessing that bludgeons...a muscle spasm of Polvo's weirdo heft and Dinosaur Jr.'s slacker fuzz, set to a disaffected punk squall." Talk about WOW. Listen to the track HERE then hurry over and pre-order the record on Red or Black vinyl, CD and digitally. 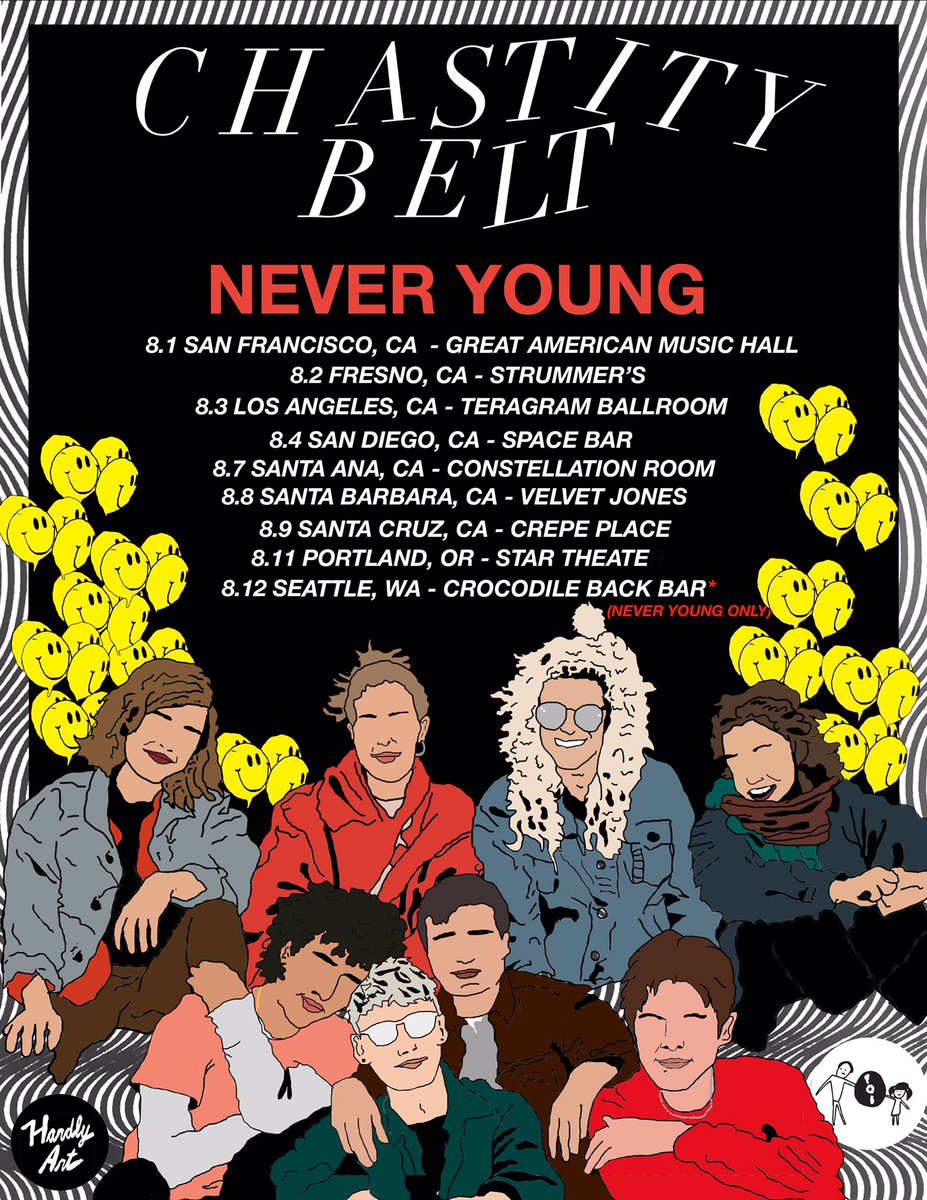 Our Bay Area buddies, Never Young, are hitting the road this August with Seattle's Chastity Belt for a 9 show tour up and down the west coast! Nab your tickets here >>> http://bit.ly/2tUkhvu before they're sold out.

Pardoner brings their twist on 90s alt-rock and punk to the table with their debut record, "Uncontrollable Salvation", our upcoming release with the San Francisco 4-piece. "Blue Hell" takes the listener on a wild ride through unrelenting guitar riffs, heavy distortion, and timely drum fills. The rest of the record is a cohesive piece with songs that reflect influence from artists like Dinosaur Jr. and Polvo. Nab a limited edition vinyl variant of the record from our store while they're still available! "Uncontrollable Salvation" releases Sept. 8 of this year.

Listen to SOAR's first single off their first LP

San Francisco and Oakland's own SOAR, a band with a composition of countless other Bay Area acts, is split-releasing their first full-length on Father/Daughter and Salinas Records! Stereogum wrote a nice piece about their first single, "Fort Funston" here. The record, "dark / gold", is 10 tracks lined with catchy harmonies and honest + personal lyrical matter. SOAR strikes a balance between something heavy and opaque, something melodic and bright, something ultimately unyielding. If you dig the single, why not pre-order a tape? "dark / gold" releases August 25th, 2017.

A statement from Father/Daughter Records

To say the last few days have been heartbreaking and trying for us, as a community, would be an understatement. The allegations that have come out about PWR BTTM are unsettling and difficult to read and digest. We do not take this nor do we take any acts of violence lightly. Personally, this has brought up a lot for me as I have also experienced physical and verbal abuse by partners in the past. Victims and survivors need to be heard, considered and supported as opening up about such trauma is extremely difficult and emotionally taxing.

We have taken a few days to process, which allowed us to be emotionally available as sounding boards for all the other artists on the label. Father/Daughter is and always will be a community for artists to thrive and grow and their feelings are equally as valid and important as the two people who run the label. In lieu of the allegations, we are no longer selling PWR BTTM music and merchandise and we will be making donations to RAINN and the NCAVP in solidarity of all survivors.

If you ever feel unsafe, scared, or need someone to talk to, please call the National Sexual Assault Hotline at 800-656-HOPE.

The wait is over! If you haven't heard Alex Napping's Mise En Place yet, you're in for a treat. The record is up on most streaming services and is still available to purchase on our store, just follow the link here. A ton of work went into the making of this album, so we're happy to finally get this amazing record into your hands and onto your turntables. 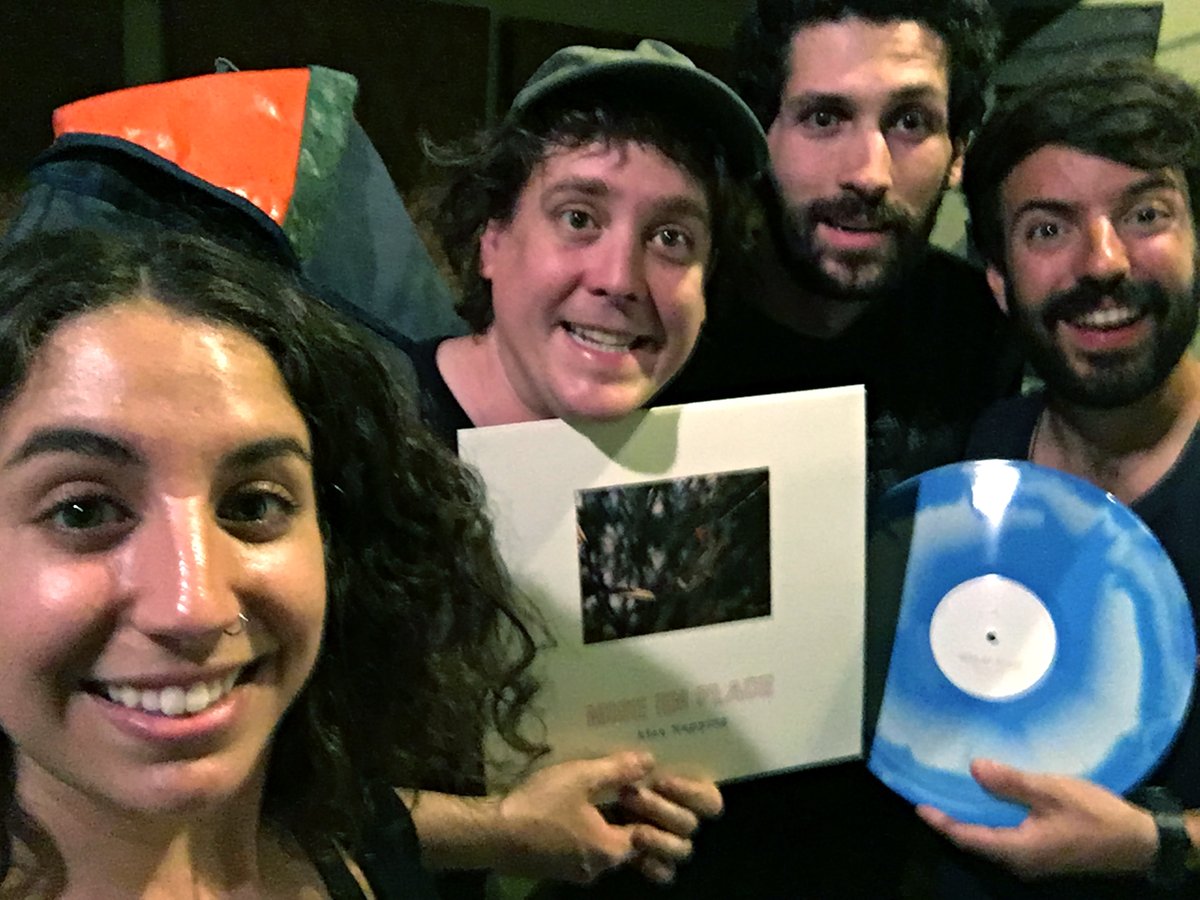 Check out our pals Alex, Adrian, Thomas, and Andrew flaunting one of our cyan and bone variants of their record! Queue applause, folks.

Listen to Alex Napping's upcoming record, Mise En Place, a whole week before release on Hype Machine. That's right. All 9 tracks are available to stream to your heart's content. And hey, when you eventually fall in love with the entire record, feel free to pick up a physical or digital copy for yourself via the link here. Oh! And we've already begun shipping CDs and records out, so keep an eyeball on your mailbox if you've pre-ordered already!

Atlanta's Art School Jocks have joined Father/Daughter to release their debut self-titled EP on June 2nd. Ecology Records will make an alternate version of the cassette coupled with a zine available locally in the Atlanta area and Jeff Rosenstock's online donation-based label Quote Unquote Records will have the EP available on their site. $1 from each sale of the Father/Daughter cassette will be donated to Meals on Wheels and ARC Southeast.

NPR All Songs Considered premiered the first single, "Just A Gwen" calling it "a great example of why Art School Jocks self-applied the description "existential basement pop," with its hooky melody and weighty subject matter." Listen to "Just A Gwen" HERE and pre-order the EP Cassette & Digital HERE.

NYC's lovable poppy punk trio Hiccup has released their debut album, Imaginary Enemies! Grab it on vinyl, CD & digitally where all music is sold (or use this HANDY LINK). Hiccup is headed out on tour in support of Imaginary Enemies, catch them on the following dates including a record release show this Sunday, March 26 at Brooklyn's Rough Trade with Laura Stevenson and Adult Mom:

If you're headed to SXSW, join us for our official showcase with Riot Act Media, Tuesday March 14th at The Sidewinder. Free for badges/wristbands, $12 at the door, and it's all ages! Arrive early for free custom nail art by Austin's Nails Y'all. Peep where/when our bands will play all week long, flyer by Nicholas Lomboy. 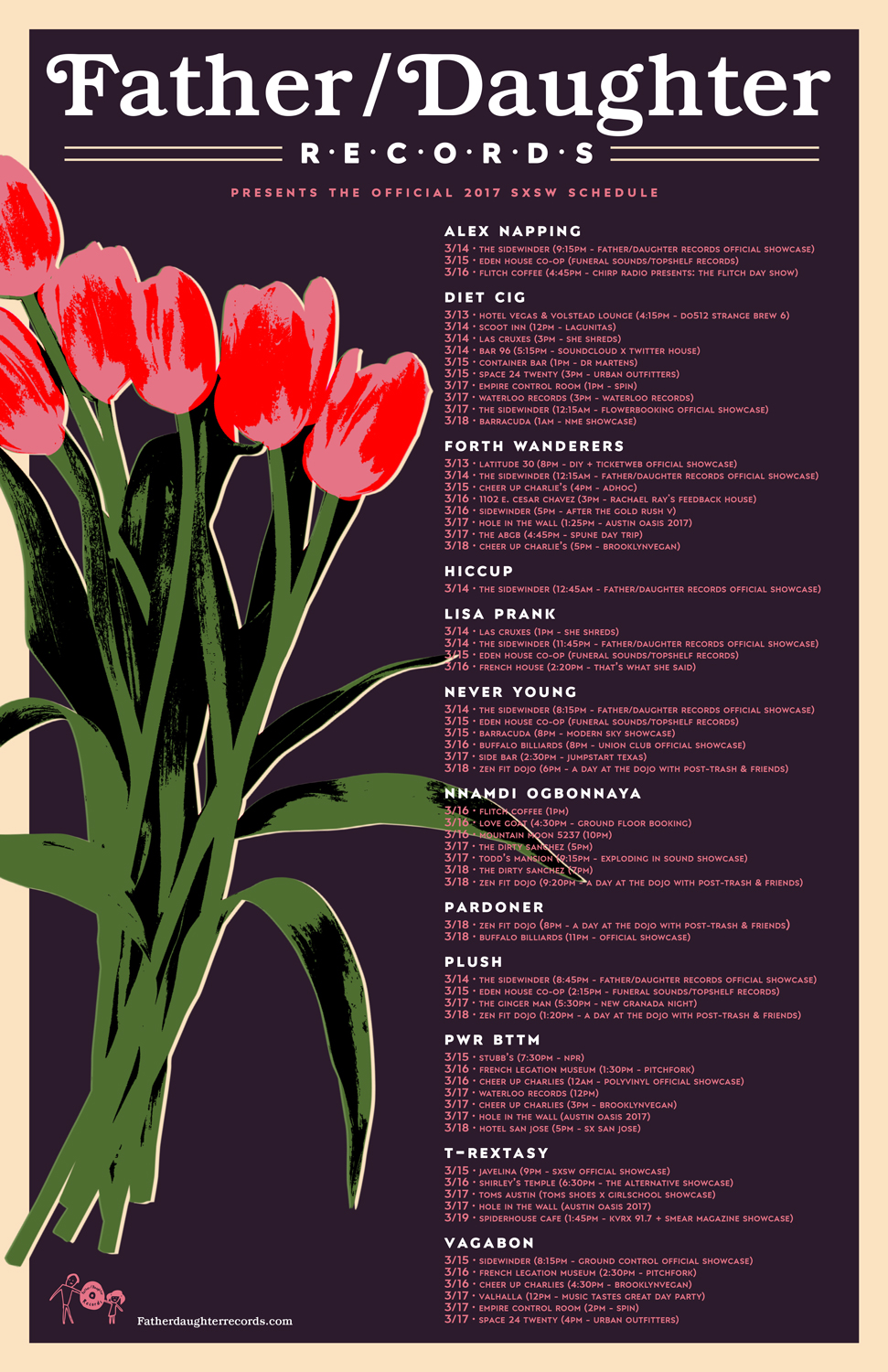 If you've heard any singles off of Infinite Worlds, Vagabon's newest record, you might already be familiar with what kind of punch Laetitia Tamko's songwriting can pack. If you haven't, it's your lucky day because NPR Music is streaming Infinite Worlds in its entirety a whole week before the record is released. This is like opening your birthday gift a week before your birthday, how exciting! Hit the link here to steam the record, and the link here to pre-order the record after you've fallen in love with it.

Austin lovelies, Alex Napping, are our newest additions to the Father/Daughter team. Fresh off the heels of their 2016 releases, Trembles Parts I and II, the group tests out their new dynamic sound with their next record, Mise En Place. They share with us their first single, "Living Room" - a moody and honest look into the feelings that come with inviting someone new into your life and into a place that could be real or just made up. Stereogum wrote an awesome piece about the new track here, so peep that if you just love alternative rock and roll publications and need some cool content in your life.

Pre-order the record on Bone and Cyan A-side/B-side wax or on Black wax on our store or our bandcamp page, and hit up Sports Day Records for a copy of Mise En Place on cassette!

Diet Cig wrote a new album! And it's coming out! Soon!

That's right. Our besties in Diet Cig are releasing their first full-length in just a few months! Swear I’m Good At This is the first full-length from the band and accumulates their tenacity for crafting life-affirming, relatable tales with a gutsy heart at their core. Luciano has the ability to write lyrics that are both vulnerable and badass, perfecting a storm of emotive reflection that creates a vision of a sweaty, pumped-up room screaming these lines in unison. The folks at Pitchfork featured the track "Tummy Ache" on their site, calling the songwriting a sentimental and relatable mix of lo-fi indie pop. Diet Cig make it okay to be the hot mess that you are.

Nab a copy on wax or on CD at the Frenchkiss Records store or a limited edition red and gold glitter cassette from our store here! Stream "Tummy Ache" the first single from their new record below.

Listen to the first single from Hiccup's very first full-length

Life is about doing new things, trying new things, and listening to new things. Why not take a dive into Hiccup's upcoming debut record Imaginary Enemies? We put out the Hiccup cassingle almost two years ago, and since then the band has been ferociously writing, playing shows, and mastering their craft. The newest single "Teasin'" displays signs of their maturity as a band and their skill in creating songs with both pop hooks and relentless pop-punk riffing. Imaginary Enemies, Hiccup's debut full-length effort, was produced by Kyle Gilbride (Waxahatchee, Swearin', All Dogs), and will be released on Father/Daughter Records on March 24, 2017.

Father/Daughter and Lame-O are tag-teaming to release Big Day, Loose Tooth's sophomore album. After touring for the last few years and playing countless local shows, the members in Loose Tooth have spun together a true cohesive piece that represents where the band stands on their sound and message. Being noisy, poppy, and heavy all the same time is a tough feat to master, but Loose Tooth has done the dang thing. Pre-order Big Day here and stream "Garlic Soup" below.

We're looking for an intern for the upcoming Spring 2017 semester, so if you live in the SF Bay Area and love independent music, we wanna talk to you!

This isn't an internship where we make you get coffee or lunch for us. We'll try our hardest to show you the ins and outs of working at an independent record label, we promise! If this sounds like something you'd like to do, email andrew@fatherdaughterrecords.com for more details.

Nnamdi Ogbonnaya is an insanely talented musician/composer/producer hailing from Chicago, IL. Over the years, Nnamdi has been in no less than 15 musical projects ranging from hip-hop, jazz, rock, and punk. Today we're pleased to announce Father/Daughter is working alongside Sooper Records to release Nnamdi's new album, DROOL, on March 3rd. Head to Sooper to pre-order one of 500 vinyl LPs HERE and CD & enamel pin bundle available HERE. Listen to the lead single from DROOL, "let gO Of my egO" below.