Listen to Attic Abasement's "Show Up to Leave"

So stoked to have Spin premiere a new Attic Abasement song today. "Show Up to Leave" is off the Rochester, NY trio's new album, Dream News, out May 27th. Grab one of three color vinyl variations before they're sold out!

Listen to the first single from Plush's Please EP

Earlier today, The Fader premiered the debut single off Plush's Please EP, calling it a "stunning song with intricate layers of shoegaze-y guitar that express confident craving". Listen to it HERE and preorder the EP HERE. Plush announced their record release show taking place on Saturday April 16th at Bottom of the Hill with Diet Cig and Jay Som.

We've loved Lisa Prank for a while now and today we are jazzed to announce that Father/Daughter will help release her new album this summer! Stay tuned for more info about the record.

Catch her on tour with Tacocat! 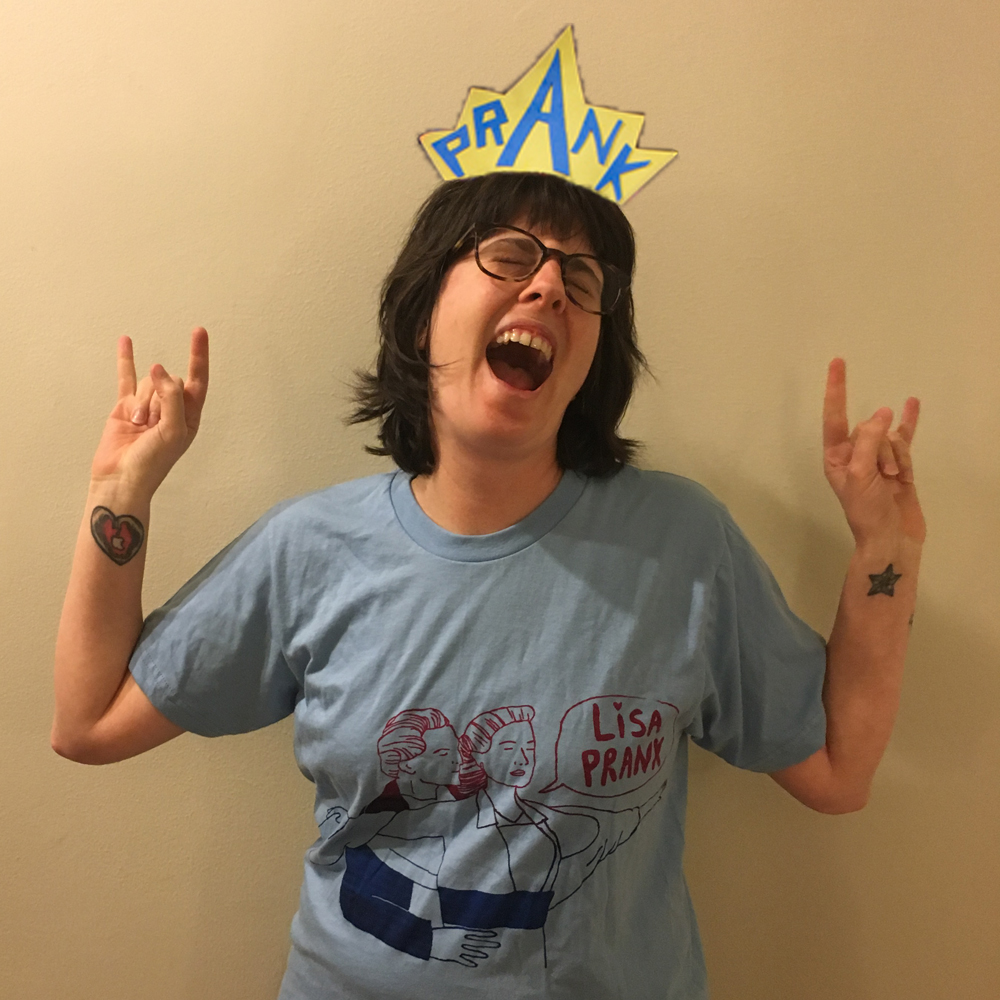 Uber excited to welcome San Francisco's Plush to the label. News surrounding their new EP to come but in the meantime if you're in the bay area for Noise Pop, catch them live tonight (Wednesday) at Bottom of the Hill. Welcome to the fam, Plush! 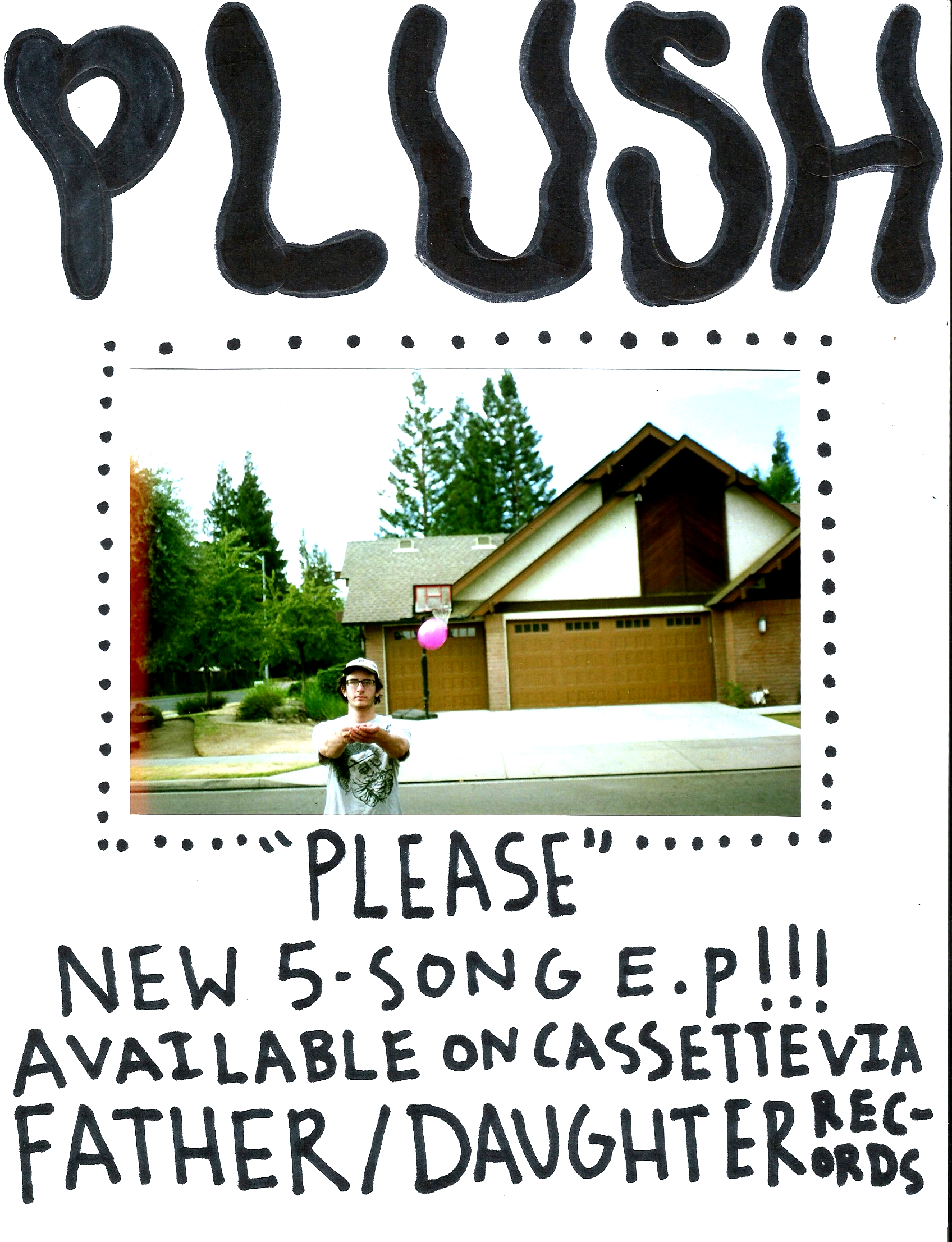 We are thrilled to be working with Madeline & Richie Follin who released their debut single "Roxy" today with an exclusive premiere on Zane Lowe's Beats 1 Radio show. Recording under the guise of their surname, Follin is the first recorded material the siblings have worked on together -- Madeline also fronts the band Cults while Richie plays double duty in Guards and The Willowz. Listen to "Roxy" on iTunes HERE.

Rochester, NY's Attic Abasement will release their first new full-length album entitled Dream News on May 27, 2016 via Father/Daughter. The 11-song record finds the band -- whose current current line-up includes Keith Parkins (bass), Joe Parker (drums), and Mike (guitar and vocals) -- in top form, recorded with Chris Daly at Salvation Recording Co in New Paltz, NY and mastered by Jamal Ruhe at West West Side. Exploring themes including war, indulgence, suicide, messiahs, the dream, and governance/corruption, the songs on Dream News draw from a wider pool of sonic influence for Attic Abasement while still maintaining cohesion and focus. This is first new Attic Abasement full-length since 2010's Dancing Is Depressing. Listen to the first single, "Guarantee Jesus" at The Fader.

Dream News is now available for pre-order on iTunes, and on CD / Vinyl / Digital from Father/Daughter. All pre-orders come with an instant download of the first single, "Guarantee Jesus." The vinyl is available on three different color variations: Aqua Blue & Beer with Black Splatter (limited to 100), Aqua Blue (limited to 200), and Black (limited to 300).

Welcome to our new home!

Big ups to our pal Jeff Casazza for helping our website dreams into reality. Get ready for even more good stuff to come in the following weeks!

It’s been a while since we’ve updated the news but that’s only because we’ve been busy releasing oodles of records. Since we last talked, Hiccup’s rad double a-side single debuted, as did SPORTS’ All of Something LP, and SPORTS lead singer/guitarist/songwriter Carmen Perry’s solo outing, Addie Pray’s Screentime. Our two fav two pieces, Diet Cig and PWR BTTM, landed on so many year end lists it got hard to keep track of and January will see them touring to new, exotic locales — Diet Cig make their first ever UK trip, PWR BTTM finally hits the West Coast.

Things may seem quiet on the F/D front but that’s only because we’re working frantically behind the scenes on some pretty epic records we can’t wait to tell you about. In the meantime, like us on Facebook and follow us on Twitter for our daily, witty banter (or so we like to think).

Buy something > donate to Planned Parenthood

With October being Breast Cancer Awareness Month, we wanted to do something to bring attention to the campaign as well as donate to a non-profit that is in an incredibly bad place right now. Some people I love have either had and overcome or sadly been taken from us as a result of breast cancer. It is the most common cancer among women in the U.S. and 1% of all cases occur in men. For those who are unable to afford healthcare, Planned Parenthood offers breast exams and mammograms in addition to providing a wealth of information about breast, cervical and ovarian cancers, STDs and general reproductive health care and sex education. Why any government official thinks it’s okay to deny a society access to information that could potentially save lives is insane to me which is why we #standwithpp and are donating 10% of every purchase made in October to Planned Parenthood. Visit our webstoreand Bandcamp and buy some good music in the name of a great cause.

This secret has been a difficult one to keep but today we’re super excited to officially welcome Rochester, NY’s Attic Abasement to Father/Daughter! Their new album will be out in early 2016 (it’s true, that picture is straight from the studio). In the meantime, get familiar with their outstanding catalog on Bandcamp and if you live in New York, go see this live this Friday October 2nd at Baby’s All Right in Brooklyn on a stacked show with Eskimeaux, Told Slant, and Real Life Buildings.

Hang with us in New York at CMJ

Super excited to team up once again with Miscreant Records for an out of this world CMJ showcase on Sunday, October 18th at Palisades in Brooklyn from 3pm to midnight. Palisades is all ages so bring your kiddos! This year’s Conscious Coupling party is homecoming themed – there will be a homecoming court crowning, a photo booth + much much more. This show also marks the 60th issue of (and possibly last) The Miscreant zine. For an extra $2 you get a special limited edition copy of the zine featuring articles and other fun stuff from the bands playing the show.

RSVP on Facebook + buy advance tickets here. See you there! 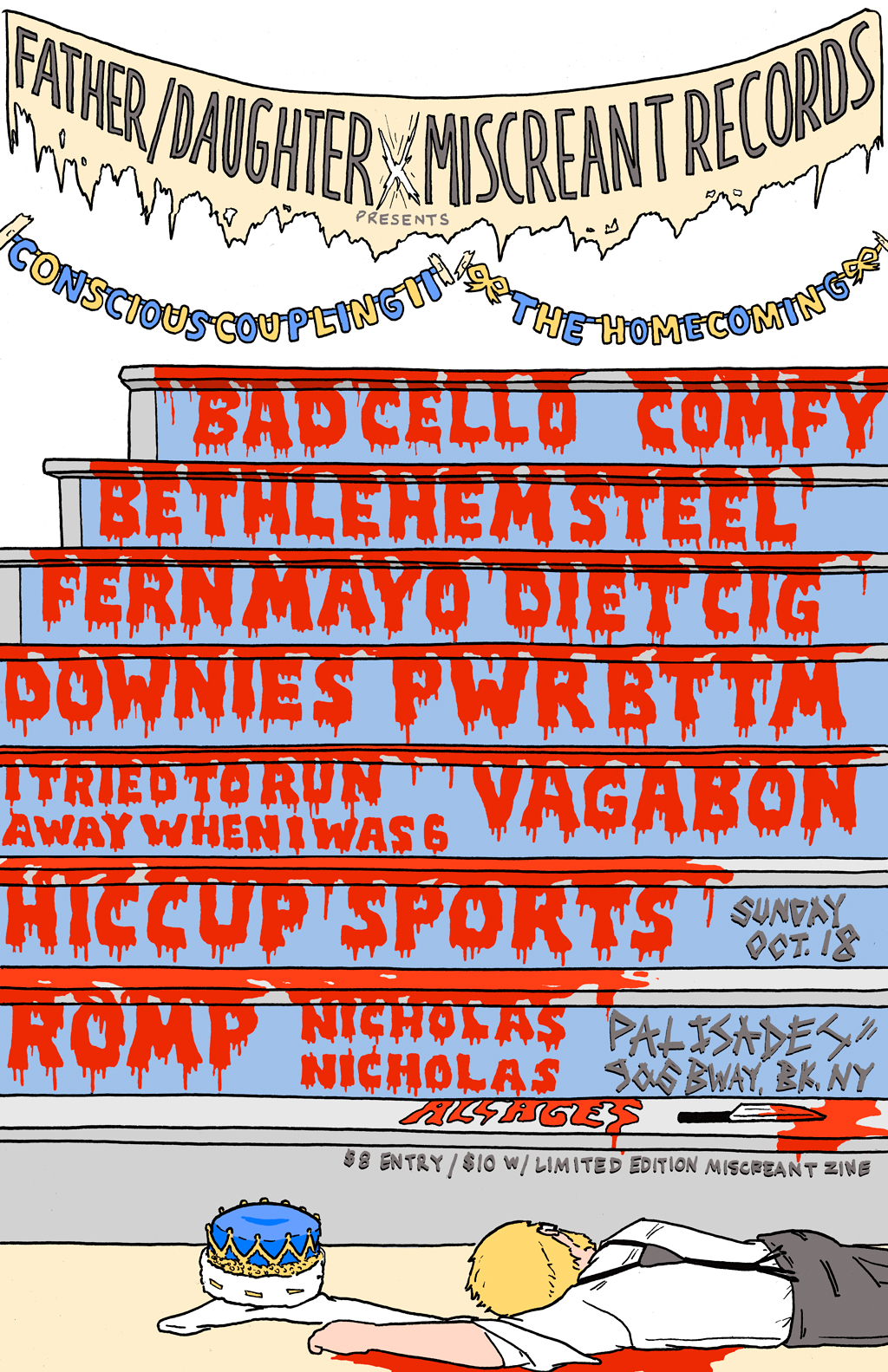 We first learned about Hiccup while perusing the Facebook feed of another Father/Daughter favorite, Chumped. Hiccup’s undeniably cute name caught our attention and the rest was history. Today we’re excited to welcome them to the label with the introduction to their self-titled debut double a-side cassingle out October 19, 2015. The cassette is limited to 250 tapes accompanied by a digital download. Dance around your office to the first song from the release, “Fuckup” featuring drummer Piyal Basu, singer/guitarist Alex Clute and singer/bassist Hallie Bulleit, both of whom you can also catch in Chris Gethard’s house band, The LLC. Pre-order the cassette on Bandcamp.