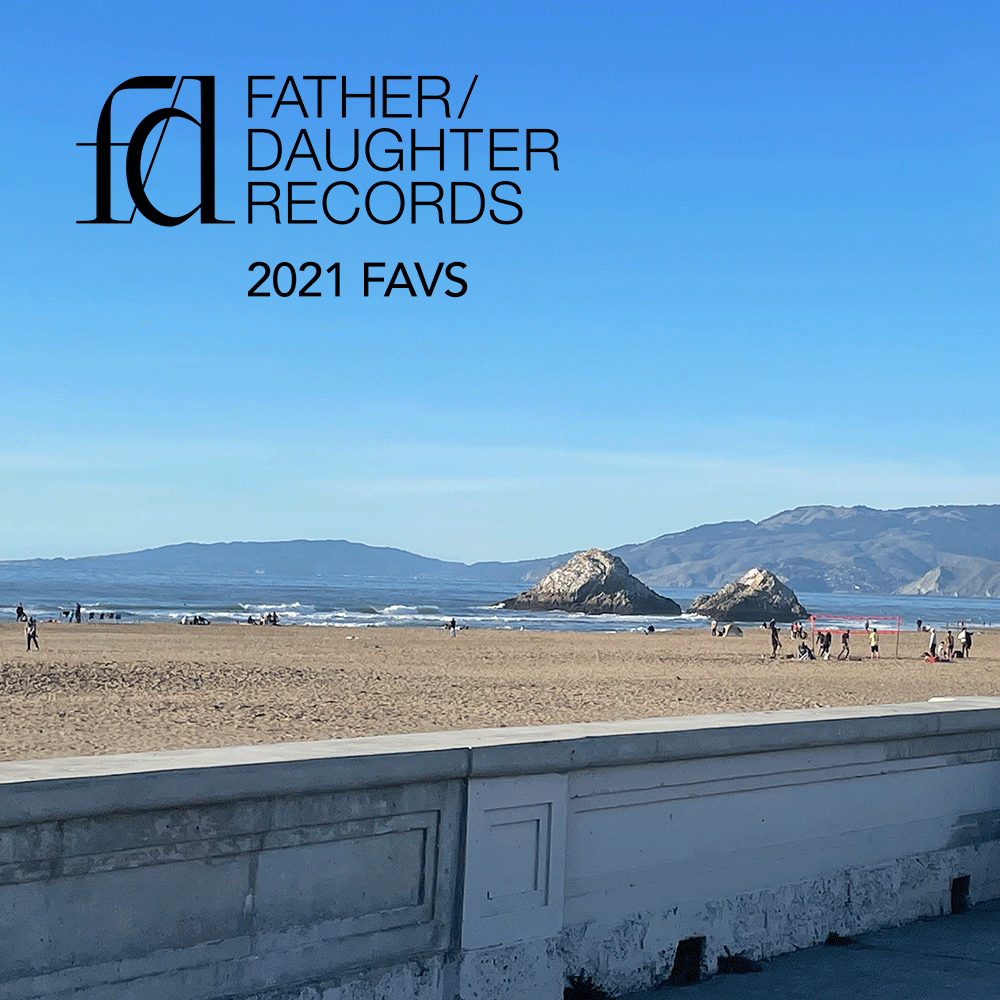 We asked some of our staff, artists & friends of the label to send us their favorite songs of 2021. Listen to the playlist on Apple Music, Tidal, Spotify, and YouTube here.

1. Grouper - Kelso (Blue sky)
Chosen by Andi Wilson (Terrorbird, Citrine Management)
Out of any song I heard throughout 2021, this one hit me like running into a sliding glass door. Absolutely wrecked me. A song that is both simple & complex, mysterious and more melody-driven compared to most of her catalogue. In addition, anytime I know a song title is named after a tiny Pacific Northwest town, I'm going to fall for it. It's a feeling you only know driving up & down the coast here, and Liz Harris perfectly encapsulates those emotions.

2. Katy Kirby - Portals
Chosen by Annie Blackman
It's almost impossible to choose my favorite song from this record. Through and through it's a no-skips album that feels fresh every time I listen. The opening line, "I'm an alternate universe in Target lingerie" is everything.

3. Kamra - Hear My No
Chosen by Jordan Lee (Mutual Benefit)
To me, Kamra's Hear My No is a subtle song of resistance against a society that pressures us to participate in harmful systems and relationships. On repeat, this song wraps you up like a blanket and reminds us that "no" is always in option.

4. NOBRO - Better Each Day
Chosen by Dave Owen (Big Scary Monsters)
NOBRO, by rights, should be about to take over the world. If you could bottle attitude/effervescence then these would be your source. With every new song they’re here to hijack your ear holes, bludgeon their way into your brain & rock you into submission with some absolute MONSTER groove ridden, foot stomping song-a-long rock and roll bastards. This song is just one of those foot stomping rock and roll bastards. GET ON THIS BAND NOW. Notable mentions in dispatches for the ridiculously good Sly from Every Time I Die (bring your XXXL sized hardcore party pants yo), the deliciously joyous 1983 from MAN ON MAN (essential misery repellent) and the seductively catchy heavyweight indie anthem ‘In My Head’ from The Mysterines (This band are better than yours).

5. SASAMI - Skin a Rat
Chosen by Anjimile
This song blew my mind the first time I heard it. So crunchy, so raw, almost raunchy in its laid-back aggression. Makes me want to get punched in the face in a mosh pit. I love this fucking song.

6. Hand Habits - Aquamarine
Chosen by Esther Rose
Meg’s delivery is devastating and the superfun dancey production contrasts and enhances the storytelling. The melody in the chorus feels like drugs. My experience with this song is that I can feel the faint glimmer of hope that surfaces from deep exploration into the void.

7. Leah Jean - Ohio
Chosen by Allison Mahal (IVPR)
Beautifully nostalgic, "Ohio" is a story song that makes me feel all the things. Leah's vocals are effortless and the production is what indie-folk dreams are made of. It's a 10/10 for me!

8. Jon Batiste - I Need You
Chosen by Maria Ivey (IVPR)
Batiste is pure joy to me. I first heard the song when he did it on Tiny Desk, the energy was palpable even through computer speakers. This song became a bit of a mantra in 2021, the refrain 'Thank you, thank you' popping into my head often. I love that it shows his New Orleans roots, and we all know the Ernie K-Doe quote, “I’m not sure, but I’m almost positive that all music came from New Orleans.”

9. PawPaw Rod - Glass House
Chosen by Jamie Coletta (No Earbuds)
Most of my favorite songs this year were from my clients but one artist I did not work with (BUT WOULD LOVE TO, HIT ME UP GODMODE) would be PawPaw Rod. My husband showed me the song "HIT EM WHERE IT HURTS" and I fell in love, then this year Paw Paw Rod dropped this song "Glass House" and I damn near lost it. I love everything about this song and vibe, truly can't wait to see what PawPaw Rod comes out with next.

10. Isaiah Rashad feat. Smino - Claymore
Chosen by Erik Garlington (Proper.)
Y'all. This might just be the smoothest song I've ever heard. After a 5 year wait for Isaiah Rashad to drop his second album, the hype was dangerously high. I remember being a few tracks into the album on my first listen, and then this song came on, and my soul left my body when Smino's verse hit. Perfection.

11. Gia Margaret - Solid Heart
Chosen by Tony Presley (Keeled Scales)
This song hit so hard after almost a year of staying home. "Do we want to talk about the year we did without?" I love how this song and its melody unfolds. I think Gia is an incredible songwriter and arranger. The line "meditating was a quiet hell" is so good.

12. Pom Pom Squad - Death of a Cheerleader
Chosen by Carmen Perry (Remember Sports, Addie Pray)
The first time listening to this song felt like getting punched in the face by a hot cheerleader. I feel like it's about the very specific form of yearning and inadequacy that comes with growing up brown and queer in mostly white spaces and feeling invisible. But it also flips the script with these brutal, self-assured lyrics like "I'm gonna marry the scariest girl on the cheerleading team." It's a song makes me feel like my feelings are a form of protection rather than a vulnerability. I like to imagine how it might have changed my perception of myself if this album was around when I was in high school.

13. Lil Nas X, Doja Cat - SCOOP (feat. Doja Cat)
Chosen by Jaclyn O'Connell (Bittersweet Media)
I wake up with this song in my head almost every day. Lil Nas X and Doja Cat are two of most incredible and innovative artists in music right now, so of course they created one of the best songs of the year. When Doja said "Can't call me stupid with this big ol' f*cking forehead m*thaf*cka" I felt that.

14. McKinley Dixon - make a poet Black
Chosen by Sadie Dupuis (Sad13, Speedy Ortiz, Wax Nine)
Eerie piano, swarming violins, and restless bass create ominous ground for the time-traveling, tightrope-walking rumination on grief and self-doubt on "make a poet Black." McKinley Dixon's deftness at jumping artistic galaxies makes his poetry that much more effecting—I listened to this song like 43 times in a row when it came out and I could listen to it 43 more right now and still feel awe with each repeat.

15. Turnstile - MYSTERY
Chosen by Jessi Frick (Father/Daughter)
What a freaking album opener! I couldn't stop listening to Turnstile's GLOW ON this year. The riffs! The jams! This song makes me feel so alive.

16. Joviale - Blow!
Chosen by Eva Liu (mui zyu)
Joviale's 'Hurricane Belle' EP is such a brilliant listen and 'Blow!' is one of my favourite songs of the year. The vocal melodies, horn lines and hypnotic drums run circles around each other. Great for all occasions, for example brushing your cat :)

17. Taylor Swift - All Too Well (10 Minute Version) (Taylor's Version)
Chosen by Robin Edwards (Lisa Prank)
This song maimed me all too well. I am forever grateful to Taylor Alison Swift for this devastating gift of a song and also to her brilliant TikTok conspiracy theorist fans for helping me find joy on the internet again.

18. Rachika Nayar & Nina Keith - In the Memory Room
Chosen by Maria BC
Of course it's impossible to choose just one favorite song, but "In the Memory Room" comes to mind right away. I'm in awe every time I hear this track - the scope of the production, the phrasing, the arc of it, how it pulls you in every direction. It was made by two people who are dear to my heart, so that does affect how it makes me feel <333, but I know if I heard this piece without that context, I would find it just as thrilling.

19. Dijon - Big Mike's
Chosen by Steven Raekwon Reynolds (S. Raekwon)
I first heard this song when Dijon posted a live clip to YouTube of him and his band playing it ahead of his album's release. I immediately fell in love with the energy. It felt as if the song was unfolding in front me in real time, a sort of controlled chaos. The album version didn't disappoint - pure magic.

20. Slug - Slug
Chosen by Brandon MacDonald (Home Is Where)
Everything I like about hardcore in one song. Ohio hardcore is on another level at the moment and can’t wait to see what else comes out of the scene.

21. Mike and the Moonpies - Hour on the Hour
Chosen by Shamir Bailey
The best country song of 2021 hands down. It's groovy, sad, and cathartic along with one of the best vocal performances I've heard in a while.

22. ML Buch - Fleshless Hand
Chosen by Margeaux Labat (Father/Daughter)
ML Buch is hands-down one of my favorite artists active right now, and I really fell in love with her music after her 2020 album, Skinned. I've been patiently waiting for new music from her, and damn this did not disappoint. In my eyes, this song is PERFECT. The sleek, spacey production, the dreamy harmonies, the echoed double-tracked vocals, just wow. There's so much depth and evolution even within this singular track. Really transports me to another world, as always. I'm obsessed with her.

23. Wednesday - One More Last One
Chosen by Tasha
I discovered this song a little later in the year, but it quickly became one of my absolute favorites. It feels emotional and all consuming. It reminds me of the songs I used to listen to in 9th grade when I’d close my bedroom door and turn my CD player up really loud and close my eyes. I think it’s a perfect song.

24. IGETUP - But You
Chosen by Tyler Andere (Father/Daughter)
My favorite song of 2021 is weirdly (maybe not so weirdly given the ongoing strangeness and instability of this year) just a short and breezy reimagination of Corinne Bailey Rae’s mid 2000s classic, “Like A Star”. It comes from the Jersey City-based artist IGETUP who’s only other release this year was an even shorter cover of “Prototype” by Outkast. IGETUP’s version has an almost celestial-like shimmer that you can loop in for hours and hours. It feels like daydreaming in the park on a sunny afternoon. I kept returning to it in moments of intense stress. There were other songs that I listened to more but this is the one that gave me the most sense of calm whenever I would put it on.

25. Martha Skye Murphy - Stuck
Chosen by Judy Silverman (Motormouthmeda)
This London-based avant singer combines a lot of things I like - unusual arrangements, theatrical drama but the quiet sense of solitude you might get from Grouper or Julia Holter. It’s almost anti-pop at times, structurally maddening - the song is like a maze, when you think you found the end you haven’t and have to turn around and keep going. It’s a challenging and sweet piece of music.